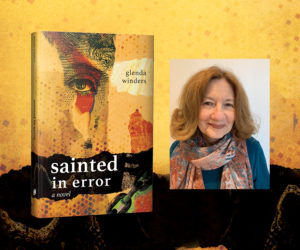 When I was still teaching college-level writing classes, I never allowed my students to use words such as “beautiful,” “wonderful” or “interesting” that would otherwise have filled their essays. These adjectives are overused, but they are virtually meaningless. A landscape can only be called “beautiful” if people observe it together. A reader wouldn’t know whether it was a desert oasis, a snow-covered mountain or the sun seeming to disappear into the sea.

And so it is with characters. Does the “interesting” man have multiple degrees, read widely and play a musical instrument or is he a biker who raises money for disabled children or a farmer raising organic vegetables and living off the grid?

Details such as these are the keys to creating characters who sit up on the page and speak, both with regard to their physical appearances and the qualities of their personalities. Charles Dickens was the master of such memorable characters, and I would argue that Stephen King is his modern-day counterpart. I’m not a fan of horror stories, but the characters in his books have sometimes brought me to tears. The warden’s wife in The Green Mile was a minor character, but she was so well-drawn that I felt like I knew her. Margaret Mitchell did the same thing with Scarlett O’Hara’s mother. Of course she was the wife of a plantation owner who lived a lifestyle we now recognize was abhorrent, but she’s the one who comes to mind when someone mentions Gone With the Wind. I read the book in college, but I still remember her long, lemon-scented skirts rustling as she lights her way with a candle on her way through the night to help deliver a slave’s baby.

King writes about how he pulls off his can’t-put-down novels in On Writing, which I reread every time I start a new piece of fiction. I recommend it for every would-be writer, but here’s what it all boils down to — details. We notice them, we comment on them and then they sometimes disappear along with the great ideas that occurred to us while we were driving or in the shower.

Knowing that, I am never without a notebook, whether I am at home, in the car, on a plane, exploring another country or visiting my adult children. I jot down physical characteristics — a mole, a drooping eye, dreadlocks, high heels, dirty hair — and, more importantly, I make note of inner qualities. Customers who snap at airport gate agents always make it into my notes, as do parents reprimanding their children, in good ways and bad. Overheard conversations are also a way into knowing who a character is. Is the speaker gossipy and negative, shrill or compassionate?

In Sainted in Error, I say everything I need to about a family observed in a restaurant when the mom tries to tidy up her son’s hair and he laughs with his dad and sisters as he playfully bats her hand away. I watch couples and try to decide if they are devoted and respectful or on the verge of divorce. I’ll never know if I’m right or wrong, and it doesn’t matter anyway. My imagination has begun to work, and the characters I create will benefit.

All of this doesn’t mean, however, that a writer can simply pluck details from her notebook and Frankenstein them together in the hope a believable character will emerge. Before she can begin to dress up her sketchily outlined characters with gray in their hair or uncontrollable jealousy or a secretive nature she must first ask who will they be and that most important of all questions: Why? What motivates them?

Think of Stella Vignes in Brit Bennett’s The Vanishing Half, for example. Once she learns that she can use her light skin to her advantage, her every thought is on how not to be discovered. Or Susan Rawlings in Doris Lessing’s unforgettable short story, To Room Nineteen, who wants only to have time alone.

Once a writer knows who the characters are going to be, then is the time to dip into the notebooks. How would a Black woman passing as white wear her hair? What would a well-off matron going slowly mad think about while she serves supper to her husband and their four children? Perhaps the answer is in the notebooks, perhaps not. Maybe from a dozen notebooks only one set of arched eyebrows, one turban on the head of a Sikh man, one angry woman’s set jaw will make it into a story. But the imagination will be sparked, and that’s when the fun begins.