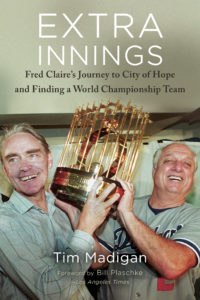 Former Los Angeles Dodgers general manager Fred Claire’s cancer diagnosis came out of left field, but at the City of Hope, he found the dream team to help him beat it.

The Los Angeles Dodgers are playing the Tampa Bay Rays in the 2020 World Series. The last time the Dodgers won the Fall Classic was back in 1988, with an overachieving team assembled by former sportswriter-turned-baseball-executive Fred Claire.

Fred Claire continued his tenure with the Dodgers until 1997, when he stepped away from the game he loved and started a glorious retirement filled with friends, family, staying active, and playing a lot of golf. But in January 2015, Claire received bad news: the supposedly harmless spot on his lip was instead squamous cell carcinoma, a potentially deadly form of skin cancer.

That’s when Claire entrusted his care, treatment, and life to the doctors and nurses at the City of Hope National Medical Center in Duarte, California. After some highs and lows, Claire is now in recovery and attributes his good health to the amazing team at City of Hope and the support of his friends and family.

Telling a story of hope in the fight against cancer

Claire was so moved by the care and treatment he received that he wanted to let the world know about the groundbreaking work happening at City of Hope. It occurred to him a book would be a great way to talk about his cancer journey to inspire others and give CoH a platform to talk about its approach. CoH was on board; it would provide support for the project and make the doctors and nurses who helped Claire available for interviews.

Claire approached our parent company, Mascot Books, about his idea and we were on board. It was an inspiring story with a worthy cause. And to help kick things off, we connected Claire with Tim Madigan, a respected author and journalist who has written for the Washington Post, Chicago Tribune, Politico, Reader’s Digest, and, for thirty years, the Fort Worth Star-Telegram. Together, we took two trips to the City of Hope to see for ourselves the exceptional care and innovation happening beyond its doors.

Madigan got to work writing the book and telling Fred Claire’s and City of Hope’s unique stories and how they came together. From its origins as a treatment center for homeless tuberculosis victims in the 1910s, CoH has become not only a leader in diabetes treatment and bone marrow and stem cell transplantation but also a leader in cancer research and treatment. Madigan captured CoH’s humanity, its combination of science and compassion, and its excellent health care professionals. One reviewer on Amazon stated, “Tim Madigan has woven [baseball and CoH] together in a masterful story that will make your soul happy.”

Extra Innings gave City of Hope the opportunity to spread the knowledge of its research and treatments far and wide. Its innovations in chemotherapy, radiation, experimental surgery, and immunotherapy all put it on par with its peers, like the Mayo Clinic. By partnering with Claire on Extra Innings, CoH advances its name and saves more lives.

People remember Fred Claire well. In the Daily Bulletin, Fred Claire’s story ran in two articles, the first titled “Writing sports in Pomona led Fred Claire to Dodgers (and World Series)” which retold his journey to becoming Dodgers general manager. In the second, “Readers haven’t forgotten Fred Claire, the Pomona sportswriter who became a Dodgers exec,” newspaper readers share their memories of Claire during the 1980s. Claire also appeared on the podcast SABRcast with Rob Neyer in May 2020 to talk about his baseball career and journey to City of Hope. Also, a review of Extra Innings is currently in the works with the magazine Baseball America.

Extra Innings drew attention because of its cancer subject matter, as well. Not only did City of Hope write an article about Claire and the book on its website (“Fred Claire: Former Dodgers GM Chronicles Cancer Journey In New Book”), but he was also interviewed by Ed Hart on From the Hart, a podcast that tells inspiring stories. Claire has an upcoming appearance on Thrive Podcast, a podcast about fighting cancer and moving forward with life, as well.

Fred Claire has had his ups and downs, but his recovery is going very well. And with the Los Angeles Dodgers contending to win the World Series again, he’s spending his free time rooting for them to repeat that victory for the first time since his team did.

All proceeds from Extra Innings go to the City of Hope National Medical Center.