Penguin Random House parent company Bertelsmann announced on November 25 that they will be purchasing Simon & Schuster for $2.175 billion, further consolidating the “Big Five” trade publishers into the “Big Four.” The deal will create what many are already calling a “megapublisher.” What does this mean for current and future authors?

Deal or no deal
The merger between PRH and S&S will likely take about a year to close, and many have concerns about whether the deal will go through due to possible legal issues. The Authors Guild released a statement criticizing the potential increase of PRH’s market share, which would rise to between 18.4% and 33% of all book units sold if the merger is completed. They have called on the Justice Department to challenge the deal and all future consolidation between publishing houses. The Guild was joined by the American Booksellers Association and the Association of American Literary Agents, both of which noted the loss of a traditional publishing choice for many authors.

What stays the same
While critics of the deal have been vocal about the way it will change traditional publishing, there are some constants authors can expect.

Retaining Core Identity. PRH CEO Markus Dohle stated that the company has previously demonstrated its ability to “successfully unite company cultures and prestigious publishing teams while preserving each imprint’s identity and independence,” referring to the merger of Penguin and Random House in 2013. Editorial autonomy will remain with each imprint’s publisher, so it is possible little change could trickle down to authors.

What changes
Many authors are wary of the PRH-S&S deal based on the history of consolidation in traditional publishing.

Lower Advances. With fewer competitors, PRH-S&S is more likely to acquire the books it wants for a lower advance. Imprints under the same parent company often don’t bid against one another, so the merged company has less incentive to offer higher advances to authors as there will be fewer imprints competing in auctions. Lower competition and fewer bids for authors mean smaller advances.

Less Diversity of Books. Different publishing houses choose to publish different projects. With fewer voices in traditional publishing, the range of published books will become more homogenous. Big Five publishers are more likely to focus on acquiring fewer books that are sure to sell, offering higher advances to secure those deals rather than taking many chances on “riskier” deals by debut authors. This trend has not gone unnoticed. An op-ed in the Los Angeles Times noted this merger comes at a moment where diversity in America is a focus, and an op-ed in The Atlantic raised concerns about preserving democracy through the diversity of thought. The Association of American Literary Agents echoed this in their statement by arguing the deal will “diminish the diversity of viewpoints and the vibrancy so essential to the future of books.” If a lack of diversity ensues, even more authors will be excluded from traditional publishing avenues.

What does this ultimately mean for authors?
It will likely become more difficult for authors to secure a traditional publishing deal in an already-competitive market. Professional writer and publishing industry commentator Josh Bernoff argues that “basically, as an author, you have to take more responsibility than ever before for your own books.” If the merger goes through, pursuing traditional publication through a Big Five publisher may be a less attractive option for authors. Authors may turn to alternative publishing options such as:

Independent Presses. Indie presses may give more time and attention to each author even if they can’t promise a big advance.

Self-Publishing. Promising total creative control, self-publishing is an option for the author who is willing to produce the book themselves in totality in order to retain full creative freedom.

Hybrid Publishing. Hybrid publishing bridges the gap between traditional and self-publishing, and appeals to authors who want the guidance of publishing experts yet have the final say on their book.

Whether or not the Bertelsmann acquisition of Simon & Schuster will go through remains to be seen. The merger of two large traditional publishers has drawn attention and speculation as to what it means for the future of publishing. What’s certain, though, is that the future of alternative publishing options has never looked brighter for authors of all genres. 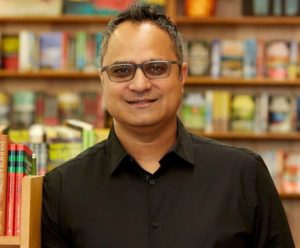 As the CEO at Amplify Publishing and Mascot Books, Naren Aryal is a recognized publishing industry expert. Naren advises authors, thought leaders, and various organizations on the opportunities and challenges that exist in the evolving publishing world. He’s guided the company’s growth from a single children’s book in 2003 to becoming one of the fastest growing and most respected hybrid publishing companies in the world. Today, Mascot Books publishes hundreds of books a year across all genres, and Amplify Publishing is a leading nonfiction imprint specializing in “big ideas” from some of the most reputable names in business and politics.

Naren frequently speaks at publishing and business events about the importance of developing compelling content and a robust author platform. He is also the author of How to Sell a Crapload of Books: 10 Secrets of a Killer Author Marketing Platform.

Prior to entering the world of books, Naren worked as a lawyer, advising technology companies in the Washington, D.C. area. He holds a B.S. in Finance from Virginia Tech and Juris Doctor from University of Denver.